Before printing think about environment!

The Spanish brand Boreal has grown its climbing shoes collection recently with the Joker. Available with shoe laces or with scratches, they look very much like their fathers, the Zen and Crux. But some very good qualities appeared on them by testing them seriously. 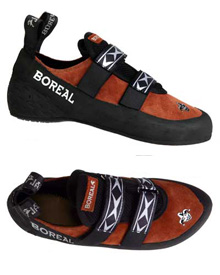 When it comes to climbing shoes testing, it?s very important to try as many surfaces possible. Just next to my climbing gym Hungaria, I took these Joker for another experience at the Indoor climbing gym in. As well as outdoor with a couple days at Freyr and in the Spanish Pyrenees.
AS Boreal says, the Joker are very comfortable and can be bought at the city size. Climbing a whole day with these shoes at your feet shouldn?t be much of a problem. It is thus in extreme cases I tested them. At the Indoor gym where I first kept them during 5 warming up routes, at no moment I felt pain or the need to take them. Concerning the sweating of the feet, Boreal had the brilliant idea to place on the Joker some sort of sock that is supposed to regulate everything. I admit it : it works rather well.
Beside all this, it?s important to take about the performance of the rubber. And for my part it?s even the most important. Boreal procured the Joker the relatively new rubber FS-Quattro. His rubber is a big steep towards the 5.10?s Stealth, considered by many as the best rubber for many years. And I might as well add that my performances were the same as usual, now I use the Joker and my old shoes. Boreal has marqued points with this. 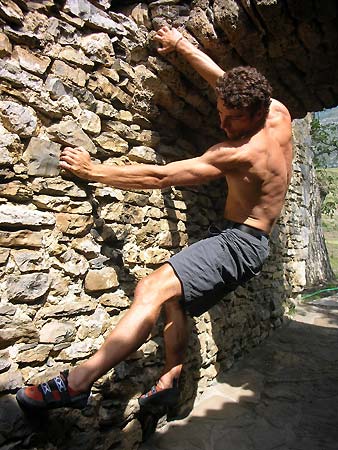 To compare with other models, it seems like the Joker are the Zen?s little brother. The Zen was lighter, more precise but were for competition climbing as well in lead than in boulder. The Crux is slightly heavier and more technical. On the other hand the Piraña that you will find in a next test is definitely more designed for precision with an extremely aggressive tip.
In conclusion the Joker is a common training climbing shoe. Its comfort, its weight and the fact that they aren?t super precise make of them a shoe to use daily, during trainings, in long routes and in indoor climbing, where other models are place on a higher level.